Affinity
As the myriad ways we interact with media become more and more individualized, crafted to meet each person’s emotional makeup, biases, biorhythms, and points of empathy, the capacity of one individual to understand another’s internal life grows exponentially. But in this not-too-distant future, where you can tell your story clearly in someone else’s emotional language, Netta questions whether translating experience really creates understanding, if none of the details of that experience remain intact.

Inspired by the research of Dr. Heidi Boisvert, an MIT research affiliate currently developing the first media genome: an open-source biometric lab and AI system to isolate the narrative ingredients that move us to act.

Commissioned and produced by Transforma Theatre Company as part of the 2021 Science in Theatre Festival.
Directed by Bryn Herdrich
November 2021

Color Blue
A pitch black comedy that transfers an incident from modern Somalia — the brutal rape and murder of two young women by Al Shabaab militants who wanted one of the girls to marry their commander — to a US middle school campus. As two 13-year-old girls skip class to get stoned, this light comedy laced with pop culture references shifts in fits and starts towards something darker, examining the common threads of misogyny experienced by women in disparate global cultures, and the ability of all societies to ignore this psychic and physical violence.

Marietta
Bron is trying desperately to work on a new painting, but her husband Hu keeps demanding her attention (and her body), and her model/muse would rather be painted by a (male) master like Klimt. Part of Exquisite Corpse Company’s Secession 2015. Inspired by the life and work of Viennese artist Broncia Koller-Pinell.

Bruno and Larry are ghosts, stuck haunting a historic hotel for what might be an eternity. Realizing that they have no grasp on the actual rules of existence, they try to avoid a team of invasive ghost hunters while Larry freaks out about theoretical physics and Bruno laments the lack of jelly donuts in the afterlife.

All This Time
Two bodies come into being. They dress each other and become a Boy and a Girl. They grow, they switch, it all begins again.

We Pray
Cami and Lucy are sisters, trying to negotiate the meaning of religion, ritual, and family at their brother, Andrew’s funeral.

Bible Burlesque (co-written with Rachel Kerry)
To raise money for the Edinburgh production of their biblical feminist burlesque-themed play, Rachel and Ali have decided to put on a night of hot, lurid bible stories – but they’ve got very different ideas about what that means. An hour of comic meta-theatrical sexy-time. In Biblical proportions.

Trouble Man (solo-performance piece, co-written with R. Ernie Silva)
A story about a man who finds trouble in smoke, mirrors and circular lies. 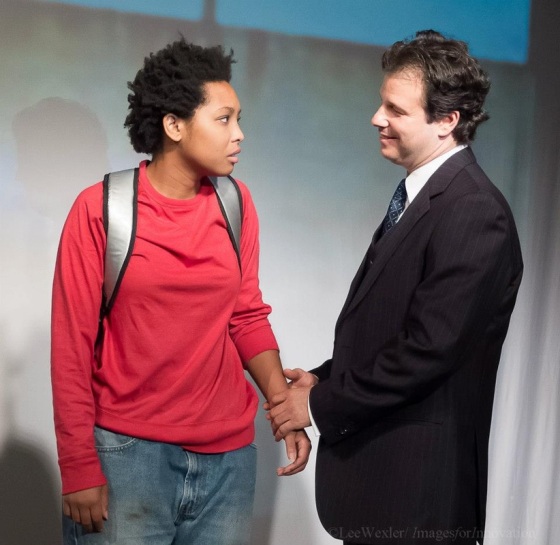 Marlena Kalm and Elizabeth Audley in ‘We Pray,’ September 2012.