Love & Kindness (10-minute drama)
James is going through a break-up, and Sammy is angry about politics. A fight about empathy, and the right way to treat the people we no longer know how to talk to.

B.C. (10-minute comedy)
15-year-olds Johna and Claire are having a sleepover. Claire takes sexy selfies and texts relentlessly. Johna obsesses over her unrequited crush and desperate need for moral guidance. But when that guidance arrives in a form more supernatural (and judgmental) than she expected, the girls are left more confused than they started.

God Bless You and Be Safe (10-minute comedy)
Claudia has been in a horrible accident, but her estranged younger sister, Janice, isn’t willing to accept that anything is beyond her control.

The Battle of Lower Sioux Agency (10-minute comedy)
Candy’s student loans have just gone into repayment, and she’s considering moving into her sister’s basement. Brett’s just out of law school and unemployed. A comedy about fantasizing about fighting back.

Mac Tonight (10-minute comedy)
Roommates Jake and Claudette discover a long-forgotten pop culture reference that makes Claudette question everything she knows — while Jake focuses on the real-world dangers lurking just outside their apartment.

Off the Cliff (10-minute comedy)
Danielle and Evey discuss guy troubles over manicures, until their manicurist reveals himself to be a forgotten high school classmate-turned AWOL drone pilot.

Craft Heights (10-minute comedy)
A newcomer to a Brooklyn crafting studio discovers that mask-making is about more than glitter and glue guns.

Leaf-Eaters (10-minute comedy)
Alyssa and Jared are bored at work. They’re bored with life. To alleviate their boredom, they watch viral videos on the internet, chat about past ambitions, start an illicit office romance, and possibly murder a coworker. A play about sloth.

Bourbon Whiskey Rummikub (10-minute comedy)
It’s time for Jake to meet the parents, but Sue insists that he learn – and master — her family’s favorite game before they go. Can this relationship survive cutthroat Rummikub?

Alaska (one-minute play)
Mindy has a boyfriend. Her best friend, Lil, isn’t happy about it. A tale of two 13-year-old potheads. 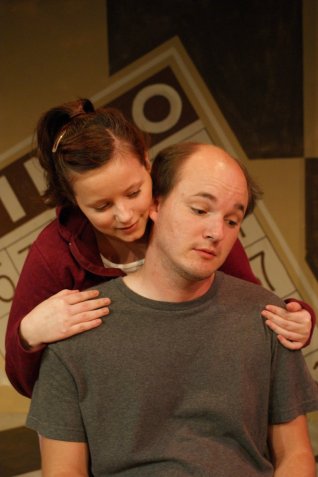